Since 1991, when a panel of the General Agreement on Tariffs and Trade (GATT) found that U.S. import restrictions on tuna from countries with high dolphin mortality violated GATT's trade rules, an entire field of law has emerged called “Trade and the Environment.” This book provides a thorough and balanced assessment of this developing area of law that affects consumer, regulatory and trade policy choices for governments around the world. It encompasses trade agreements and the evolving jurisprudence, from the 1991 tuna-dolphin case up to actions on agricultural subsidies in late 2004.This book is designed to teach students with no prior background in trade law or environmental law. It is also designed to be equally accessible to students and professors from civil law as well as common law jurisdictions. Opening chapters present key trade and environmental policy theories and concepts, and introduce the structure of the World Trade Organization (WTO) and its process for adjudicating trade disputes. Substantive chapters comprehensively assess the GATT's core obligations and the “general exceptions” to those obligations for certain types of environmental measures. WTO agreements such as the Agreement on Technical Barriers to Trade, the Agreement on Application of Sanitary and Phytosanitary Measures, the Agreement on Subsidies and Countervailing Measures, and the Agreement on Agriculture are covered. There are substantial excerpts from decisions in the key trade-environment disputes, including the famous cases addressing protection of sea turtles in shrimp fisheries, growth hormones and risk assessment, natural resource and agricultural subsidies, and bans on the use of asbestos. Unresolved issues such as ecolabels and genetically modified foods and the legal status of trade measures in multilateral environmental agreements are also discussed. In addition, the book has a chapter on the North American Free Trade Agreement (NAFTA) and its environmental side agreement, including investment provisions and investor-State arbitration.Throughout, the book presents policy arguments about the connections between trade and environmental protection and the linkage with broader concerns about sustainable development and the economic and environmental prospects for developing countries. It also considers the work of international institutions created to address these connections and the role of public participation in both disputes and trade agreement negotiations.Because the complexity of trade and environment issues often obscures the real significance of the decisions, a special feature of this book is extensive background material and commentary and numerous “Questions and Discussion” points. These features are designed to make trade policy and trade jurisprudence accessible to teachers and students alike. 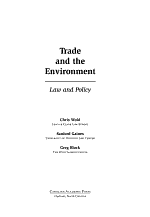 Authors: Chris Wold, Sanford E. Gaines, Greg Block
Categories: Law
Since 1991, when a panel of the General Agreement on Tariffs and Trade (GATT) found that U.S. import restrictions on tuna from countries with high dolphin mortality violated GATT's trade rules, an entire field of law has emerged called “Trade and the Environment.” This book provides a thorough and balanced 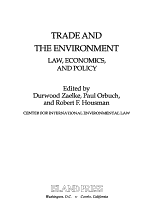 Authors: Durwood Zaelke, Paul Orbuch, Rob Housman
Categories: Law
Trade and the Environment is an important primer for anyone concerned with the impact of trade agreements on the global environment. After examining some of the broader aspects of the debate, the book turns to specific concerns: When is it appropriate for one country to use trade measures to influence
Language: en
Pages: 768

Authors: Shahrizal Mohd Zin
Categories: Law
ABSTRACTIn the past years, the WTO jurisprudence has been witnessing enormous increase in the impact of international law. As such, a study of the current trends in the interplay between WTO law and international law and the impact that are visible in the judicial pronouncements is inevitable for ascertaining the
Language: en
Pages: 168

International and European Trade and Environmental Law After the Uruguay Round 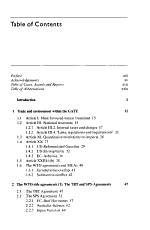 International Trade and the Protection of the Environment