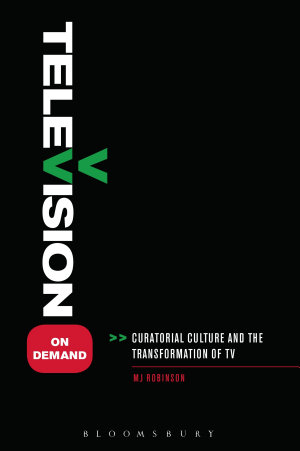 Since 2010 “curation” has become a marketing buzzword. Wrenched from its traditional home in the world of high art, everything from food to bed linens to dog toys now finds itself subject to this formerly rarified activity. Most of the time the term curation is being inaccurately used to refer to the democratization of choice – an inevitable development and side effect of the economics of long tail distribution. However, as any true curator will tell you – curation is so much more than choosing – it relies upon human intelligence, agency, evaluation and carefully considered criteria – an accurate, if utopian definition of the much-abused and overused term. Television on Demand examines what happens when curation becomes the primary way in which media users or viewers engage with mass media such as journalism, music, cinema, and, most specifically, television. Mass media's economic model is based on mass audiences – not a cornucopia of endless options from which individuals can customize their intake. The rise of a curatorial culture where viewers create their own entertainment packages and select from a buffet of viewing options and venues has caused a seismic shift for the post-network television industry – one whose ultimate effects and outcomes remain unknown. Curatorial culture is a revolutionary new consumption ecology – one that the post-network television producers and distributors have not yet figured out how to monetize, as they remain in what anthropologists call a “liminal” state of a rite of passage – no longer what they used to be, but not yet what they will become. How does an advertiser-supported medium find leave alone quantify viewers who DVR This is Us but fast-forward through the commercials; have a season pass to The Walking Dead via iTunes to watch on their daily commutes; are a season behind on Grey's Anatomy via Amazon Prime but record the current season to watch after they're caught up; binge watched Orange is the New Black the day it dropped on Netflix; are watching new-to-them episodes of Downton Abbey on pbs.org; never miss PewDiePie's latest video on YouTube, graze on Law & Order: SVU on Hulu and/or TNT and religiously watch Jimmy Fallon on The Tonight Show via digital rabbit ears? While audiences clamor for more story-driven and scripted entertainment, their transformed viewing habits undermine the dominant economic structures that fund quality episodic series. Legacy broadcasters are producing more scripted content than ever before and experimenting with new models of distribution – CBS will premiere its new Star Trek series on broadcast television but require fans to subscribe to its AllAccess app to continue their viewing. NBC's original Will & Grace is experiencing a syndication renaissance as a limited-run season of new episodes are scheduled for fall 2017. At the same time, new producing entities such as Amazon Studios, Netflix and soon Apple TV compete with high-budget “television” programs that stream around traditional distribution models, industrial structures and international licensing agreements. Television on Demand: Curatorial Culture and the Transformation of TV explains and theorizes curatorial culture; examines the response of the “industry,” its regulators, its traditional audience quantifiers, and new digital entrants to the ecosystem of the empowered viewer; and considers the viable future(s) of this crucial culture industry. 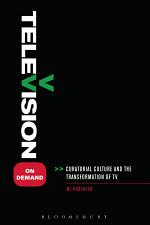 Authors: MJ Robinson
Categories: Social Science
Since 2010 “curation” has become a marketing buzzword. Wrenched from its traditional home in the world of high art, everything from food to bed linens to dog toys now finds itself subject to this formerly rarified activity. Most of the time the term curation is being inaccurately used to refer

TV Writing in the Digital Era

Authors: Neil Landau
Categories: Art
TV Writing on Demand: Creating Great Content in the Digital Eratakes a deep dive into writing for today's audiences, against the backdrop of a rapidly-evolving TV ecosystem. Amazon, Hulu and Netflix were just the beginning. The proliferation of everything digital has led to an ever-expanding array of the most authentic
Language: en
Pages:

Producing Children's Television in the On Demand Age 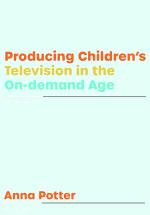 Producing Childrens Television in the On Demand Age

Authors: Anna Potter
Categories: Art
This book provides a detailed account of the creative, economic and regulatory processes underlying the production of children’s television in a multi-platform era. Its collection of integrated case studies includes extended interviews with leading producers whose programs are watched by children all over the world. These reveal the impact of 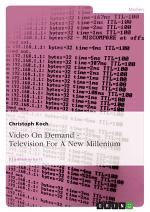 Video On Demand - Television For A New Millenium

Authors: Christoph Koch
Categories: Performing Arts
Seminar paper from the year 1998 in the subject Communications - Movies and Television, grade: 1, Ohio University (School of Telecommunication), course: New Technologies of Telecommunication, 17 entries in the bibliography, language: English, abstract: There has been a lot of talk about video on demand (VOD) in the last couple