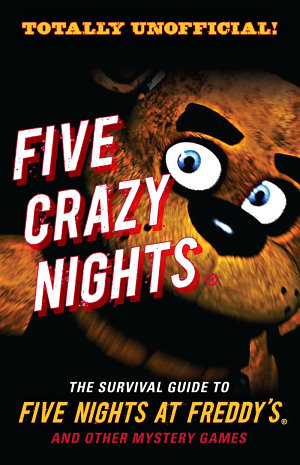 Kids and adults around the world are having the living daylights scared out of them by Five Nights at Freddy’s (FNaF), the cute and original charmer of a horror game on mobile devices and PCs. As a security guard, stationary players must monitor an overnight shift through a bank of security cameras at a children’s pizza joint, and keep an eye out for the animatronic animal robots, which have a tendency to mischievously move around at night. From the just-off-screen action, to the clever use of creepy noises, to the murky onscreen mayhem, this game requires players to achieve set goals in a fixed amount of time, and treats them to a fright fest with a fresh twist that keeps them coming back for more. The “Five Nights” are levels, and they get progressively more difficult to survive. Five Crazy Nights: The Survival Guide to Five Nights at Freddy’s and Other Mystery Games celebrates the ingenuity of the game, and gives readers the tips and tools they need to not just survive, but thrive, into the sixth night at Freddy’s and learn more about the ever-evolving FNaF world.CONTENT INCLUDES: • History of the Game: The interesting back-story of the creation of the game and the Five Nights at Freddy’s world. • Tips & Tricks: Including how to maximize your power supply and getting the most out of your doors. • Opponent Tendencies: Learn the tendencies of each terrifyingly cute robotic animal.